Remembering the “Planters” in Canadian History

I take some pleasure in seeing “Planter Nova Scotia” mentioned in various publications.[1] While the term “planter” was occasionally applied to the immigrants from New England who settled in the old colony of Nova Scotia (which included New Brunswick) between 1749 and 1775, it was not in common usage until the twentieth century. A.W.H. Eaton in his History of Kings County, Nova Scotia, published in 1910,[2] described his ancestors as “planters,” perhaps to avoid the unhelpful “pre-Loyalist” handle, but J. B. Brebner referred to them only as “New Englanders” or “Yankees” in his influential study of The Neutral Yankees of Nova Scotia (1937). When Ronald. S. Longley, a professor of history at Acadia University, wrote an article to commemorate the bicentennial of “The Coming of the New England Planters to the Annapolis Valley,” he drew on Eaton’s vocabulary.[3] These publications probably informed the thinking of Edgar McKay, Alice Stewart, and Ronald Tallman from the University of Maine’s New England-Atlantic Provinces Center (est. 1968), who used the term “planter” when they consulted Barry Moody and myself in the early 1970s about the New Englanders who had settled in Nova Scotia after the expulsion of the Acadians and murderous efforts to subdue the Mi’kmaq and Maliseet.

Esther Clarke Wright, an independent scholar with both Planter and Loyalist roots, came fast on the heels of the Americans. In 1974 she conscripted former Acadia University president Watson Kirkconnell, Barry Moody, and myself as members of a committee tasked with bringing more attention to the planter migration. She inevitably took the lead, hiring Carol Janzen to help her put together a catalogue of New England families (roughly 8,000 people) who responded to Governor Charles Lawrence’s proclamations in 1758 and 1759 inviting immigrants to Nova Scotia on exceptionally favourable terms, among them free land, freedom of religion for Protestant dissenters, and exemption from quit-rents for ten years. Gathering up information on other immigrants from this formative period in the history of the Maritime Provinces, Dr. Wright self-published Planters and Pioneers: Nova Scotia 1749-1775 in 1978 and peddled it around to booksellers. It quickly sold out its first run and she published a revised edition in 1982. 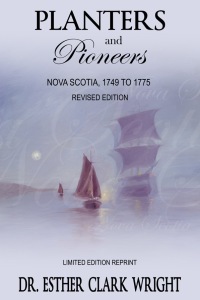 When the 150th anniversary of Acadia University loomed in 1987, an expanded Planter Studies Committee organized a “workshop” on the New England Planters, with a capital “p.” It quickly turned into a conference attracting 125 people, many of them from nearby communities, which their Planter ancestors had founded. With the help of a SSHRC Occasional Conference Grant, Acadiensis Press published a selection of the papers presented at the conference under the title They Planted Well: New England Planters in Maritime Canada (1988). It long ago sold out its print run and is now posted online.[4] With start-up funding from Dr. Wright, a Planter Studies Centre was established at Acadia University and several conferences and edited volumes followed.[5] Wright used the term “pioneers” to cover those not designated “Planters” in the narrow New England and even narrower Annapolis Valley sense, but I and others focusing on this period of Maritime history find “Planter Nova Scotia” useful in describing the great land rush that swept across the Maritime region beginning with the founding of Halifax and ending with the American Revolution.

“Planter” is a slippery term used in various ways, including aspects of settlement in Ireland, Newfoundland, and Virginia. In the Nova Scotia context, it now denotes settlers recruited by private and public agencies to occupy the colony beginning in 1749. In this sense, my “Foreign Protestant” German ancestors were Planters as were Acadians who resettled in the Maritime region after the Seven Year’s War. Irish, English, and Scottish immigrants also took advantage of the generous land grants offered by the Crown in this period and thus fall conveniently under the “Planter” designation. Among the arrivals from Yorkshire were Christopher Harper, his wife Elizabeth, and their seven children, who settled in Cumberland Township in 1774-75, just in time to get roughed up in the Eddy Rebellion the following year.[6] If we include Stephen Harper on the list, Canada claims four Prime Ministers with Planter origins, the others being Richard Bedford Bennett, Robert Borden, and Charles Tupper. They were all Conservatives but it could scarcely be otherwise since the Liberals have never chosen a party leader from anywhere other than Quebec and Ontario. Of these four men, only Bennett was so desperate to claim Loyalist rather than Planter descent that he engaged the Dominion Archivist to delve more deeply into his ancestry.

Bennett’s status dilemma resulted in part from the blurring of identities when some 35,000 Loyalists swamped the roughly 25,000 people living in Nova Scotia in 1782. Following the American Revolution, Planters of all backgrounds became Loyalists by default and their unique position in the history of the Maritimes and Canada was largely forgotten. And while the term “Planter” is now in common usage, as a group they are still ignored by most historians of Canadian immigration who, if they cover the pre-Confederation period at all, usually focus on the Loyalists and the Irish.

Creating a vocabulary to generalize about the mass of information surviving from the past is one of the most important jobs that historians do. Over the past half century, scholars researching the history of Atlantic Canada have done much to help us come to terms with the impact of the dramatic developments that occurred in the long eighteenth-century (1689-1815), a period essential to our current understanding of the region and of our nation. “Planter Nova Scotia” is a good term to use for now but it, too, will no doubt soon be contested because that is also what historians do.

Margaret Conrad is Professor Emerita in the Department of History at the University of New Brunswick.

The Acadiensis Blog is a place for Atlantic Canadian historians to share their research with both a scholarly and general audience. We welcome submissions on all topics Atlantic Canadian. If you are interested in contributing to the blog, please contact Acadiensis Digital Communications Editor Corey Slumkoski at corey.slumkoski@msvu.ca.
View all posts by The Acadiensis Blog →
This entry was posted in Nova Scotia. Bookmark the permalink.

2 Responses to Remembering the “Planters” in Canadian History