The following post is the sixth in a series that features collaboration between the Acadiensis blog and the students in Jerry Bannister’s undergraduate and graduate Canadian Studies and History classes at Dalhousie University.

Why has it become so easy to dismiss the words that our new and “improved” Prime Minister Justin Trudeau says? Why have we decided to place Trudeau on a pedestal and consider him to be the hero Canada needed to be saved from Stephen Harper? It seems to me that we embrace Justin Trudeau with arms wide open because we are currently in a post- Harper euphoria. We became so involved with how the media was portraying Harper and turned our backs against him. We have neglected everything Harper stands for because of a mob mentality that has been spread around our country, mostly for the sole reason that he is not the person we want to be supporting. 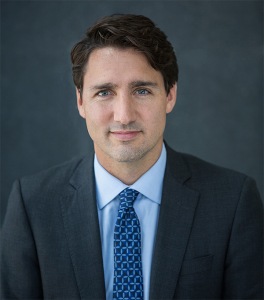 We have not seen a big change between the policies inflicted by Stephen Harper during his time in parliament and how Justin Trudeau is conducting himself and the government so far during his time in parliament. Although the Liberal party made many big promises during the course of the election, not much has taken place to support their words. It is obvious that Justin Trudeau is favoured over Stephen Harper. The media has sculpted Trudeau in a way that illustrates an attitude and personality of confidence and newness. He was privileged by having Pierre Elliott Trudeau as his father. But the argument that Trudeau has attained such a high level of success cannot be said to have been achieved because of who is father was. Pierre Elliott Trudeau was a great teacher, leader, and father and that is why our new Prime Minister is a qualified individual to run our country. Justin Trudeau is completely benefiting from the sense of Harper relief that many Canadians are feeling.

The media has constructed Justin Trudeau in a way to allow words said by him and against him to slip off before they have the chance to have a lasting impact. For example, when Stephen Harper apologized for the wrongdoings committed by the federal government in regards to Indigenous peoples and residential schools the people did not think his apology was sincere. But if Trudeau had said the exact words as Harper, the public would have, most likely, accepted the apology more openly. There has been a stigma surrounding all aspects encompassing Harper. Justin Trudeau has become a sort of Teflon pan.

Stephen Harper on the other hand was critically watched and analyzed based on his every move. Harper conducted himself in a way that made him less approachable because of the person he created that made him seem like he was satisfied being alone. By the end of his last term in parliament, most people generally disliked Harper. Since Trudeau has taken the role of the Prime Minister of Canada we have not seen any big change in policy or governance, but what we have seen is a cultural and social adjustments. Society has reacted to Trudeau becoming Prime Minister by giving him praise and glory before he has even had the chance to do anything. Because Canadian citizens were adamant on removing Harper from parliament Trudeau has been given celebrity status for two reasons. The first, he is not Harper and he is not a Conservative. Secondly, his ability to conduct himself in a way that appeals to people. He is charming, witty, able to converse easily, and he is personable.

It seems as though we as Canadians are in the honeymoon stage with our new Liberal government. During the federal elections when Stephen Harper enacted Bill C-51 and committed to fighting the American war in the Middle East, Trudeau did not give an initial statement. According to Haroon Siddiqui, Trudeau “has since worked at plausible-sounding explanations, he tried to strike a balance between war-monitoring and being helpful, providing security without sacrificing freedoms” (Siddiqui). Trudeau was exalted even in his wrongdoings. He was given a way out unlike Stephen Harper would have received. Because of this honeymoon stage and anti-Harper atmosphere that was created nothing sticks to Trudeau. He is easily let off the hook because he is considered to be a better candidate for the Canadian Prime Minister. Although he has made many promises to Canadians and said he would make changes, there just does not seem to be any evidence to prove that he has taken forceful action to bring about results. What Justin Trudeau has succeeded at doing is creating a gender equal Cabinet.

Despite how easy it is to focus on what is not going how we expected, I think it is best to look to the future with hopeful eyes. It does not take a lot of research and discussion to discover that Justin Trudeau has benefited from Stephen Harper’s suffering during the last months of his term. A politician must work their magic and the individual with the best means will be the victor. Justin Trudeau has been fully immersed in the public eye and has been able to maneuver his way through to achieve his goals and he has done a great deal in creating equality for our country in the past thirteen months.

Shawna McKay is an undergraduate student at Dalhousie University. This post was originally written in 2016 for Jerry Bannister’s undergraduate Canadian Studies class at Dal.