Posted on October 4, 2017 by The Acadiensis Blog

On 25 July 2017, a large crowd gathered at Colliery Lands Park in the small Cape Breton town of New Waterford to remember the worst colliery disaster in the history of the island’s coal fields. Bobby Burchell, a former coal miner and UMWA representative, spoke to those gathered, “We do remember and we do honour those that worked in the mines. Almost everybody who lives in Cape Breton is touched by a mining tragedy.” One hundred years prior, at approximately 7:30 a.m. on 25 July 1917, a massive explosion rocked levels six and seven of the Dominion No. 12 Colliery. When all was told, 65 lives were lost – men and boys alike, some as young as 14 years old – with dozens of other injuries from rock and gas. As horrified family members looked on, draegermen took the dead and injured, one by one, out of the mine. 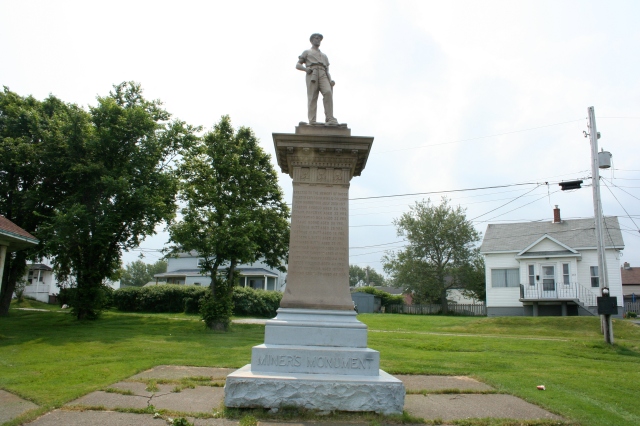 Memorial to the miners killed in the 1917 explosion of Dominion No. 12 Colliery.

With the entire town grieving, it did not take long for the miners, their families, and company officials to begin looking into the causes of the disaster. The Dominion Coal Company immediately placed the blame on “human error;” a union man, 45-year-old John McKay, was negligent in his duties – officials declared. McKay, stationed on level six, was himself killed in the ensuing disaster.

At the centennial memorial service in New Waterford this past July, I had the pleasure of meeting 79-year-old Eunice McCarthy – John McKay’s granddaughter. For Eunice, the 1917 explosion had deeply impacted her family and her words brought a personal connection to an event that – for many – seems intangible. She told the Cape Breton Post, “My mother Jenny (Deveaux) never even knew her father . . . She was only nine months old when the explosion happened. She grew up without her father and always wondered about him. But that wasn’t the only family, there were 64 more.” Eunice also spoke about the community reaction; unlike the company, McKay’s fellow miners did not blame him for the explosion. Indeed, Eunice recalls seeing a photograph of dozens of miners streaming out of St. Agnes Parish in New Waterford after attending her grandfather’s funeral.

The explosion, occurring during the First World War, came at a time of greatly increased demand for Cape Breton coal. The mines were being pushed to increase production for the war effort, and workers described laxity in safety standards, ventilation, and proper maintenance. Many would later testify in a provincial inquiry that the mine was gassy, and that not enough brattices were being used to ensure proper air circulation. So firm were they in their belief that in October the miners’ union successfully argued to a New Waterford grand jury to bring charges against two mine officials – Angus R. MacDonald and Alexander MacEachern – and one government official, Deputy Inspector of Mines Michael McIntosh.

McIntosh, in fact, had not completed any of his required inspections in weeks – when questioned on this, he argued that he had fallen quite ill, only recovering in time to attend the hearings. The case, however, only got as far as the Sydney courthouse, when it came before Judge Humphrey Mellish. The judge summarily dismissed the charges, arguing that the miners’ had failed to show that the conditions of the mine were in any sense deteriorated. Mellish, of course, had spent years working as a lawyer for the Dominion Coal Company before being appointed to the bench – not an uncommon occurrence in Cape Breton during the early 20th century.

Despite the loss in court, the miners and their union were clear in whom they blamed for the disaster: the Dominion Coal Company and its incompetent officials. Several miners, including McKay’s son Henry – who was working in the mine during the explosion – later expressed this view to interviewers from Cape Breton’s Magazine. In 1922, the union would arrange for a memorial statue to be erected near the site of the union hall. This would bear the image of John McKay along with the names of the 65 dead coal miners. This statue stands today in the centre of New Waterford, alongside a memorial to William Davis – a miner murdered in a confrontation with company police during the 1925 coal strike.

The names of some of those killed in the 1917 explosion.

There are several lessons of the 1917 explosion that continue to ring true for workers’ today. Coal mining, like many forms of industrial work, remains a dangerous job. It likely always will be, as long as men and women are working underground. But from tragedies like the 1917 explosion, we witnessed the emergence of a protracted form of working-class resilience that pushed to reform Canadian business practices and produce a set of fair and equitable guidelines, along with a regulatory framework that encompasses unionism, to make things a little bit better for working men and women across the country.

This is not to say that the loss of these 65 men and boys was “worth it,” or that it was justified in light of what came after. Indeed, it wasn’t a sacrifice that any of them signed up to make. They signed up to go to work, to bring home enough money to feed their families, and to maybe make a worthwhile life in Cape Breton. They did not sign up to work in conditions beset by unattainable production quotas, Dominion Coal Company owners who constantly pushed workers to the breaking point, or in a gassy mine that was set to explode.

If we are thinking historically, we can see that the 1917 explosion in New Waterford really has several different meanings: first and foremost it was a terrible tragedy. It was a tragedy that deeply traumatized and shocked an entire community and that lives on in the stories and family histories that are passed on. But it also prompted a step towards envisioning a safer more equitable society, one that has required great struggle – oftentimes by ordinary men and women in small towns like New Waterford. And that, too, is part of the legacy of the 1917 explosion that we must not forget.

Lachlan MacKinnon is a SSHRC Postdoctoral Fellow with the Gorsebrook Research Institute for Atlantic Canada Studies at Saint Mary’s University. A graduate of Concordia University, his 2016 PhD Dissertation, “Deindustrialization on the Periphery: An Oral History of Sydney Steel, 1945-2001,” won the Eugene A. Forsey Prize for best graduate thesis in Canadian working class history.