Posted on November 14, 2018 by The Acadiensis Blog

New Brunswick’s Program of Equal Opportunity ushered in dramatic reforms to the cultural, social, political, and economic landscape of the province in the 1960s. When it came to the delivery of social services, Laurel Lewey, Louis J. Richard, and Linda Turner note, Equal Opportunity’s impact was “unprecedented” (178). Responsibility for welfare was transferred from municipalities to the province and, with the help of new revenue generated by tax reforms and a more efficient bureaucracy, the Louis J. Robichaud government was able to standardize and improve services in health, welfare, and education. 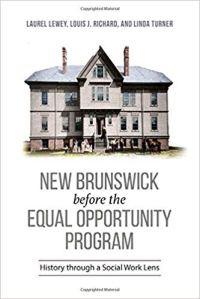 New Brunswick before the Equal Opportunity Program reminds us what Robichaud was facing when he took office in 1960. In this collectively-authored and ambitious study, Lewey, Richard, and Turner survey the “patchwork” and “mosaic” landscape of social welfare across New Brunswick, the efforts of welfare workers and volunteers to ameliorate the harsh conditions of poverty, and the tentative (and mostly ineffective) forays into publicly-provided welfare in the early decades of the 20th century. Through ten wide-ranging chapters that cover everything from the contours of the New Brunswick economy to close analyses of the lives of the first Acadian social workers, they extrapolate  three main threads: the structural inequalities that made social need more acute among specific groups; the logic of a capitalist, resource-based economy that allowed wealth to be concentrated in the hands of the few; and the fact that religious, non-governmental, and charitable organizations bore the majority of social welfare responsibilities for many decades before Equal Opportunity was introduced.

The strongest of these threads is the attention to the structures of “prejudice, paternalism, and colonialism” (79) that generated disadvantage and need. The first two chapters set the tone of the book by providing deep historical context of the peoples and economy of the province; as the authors point out, “in New Brunswick’s history lie all the ingredients for a recipe for disaster and hardship for entire communities” (8). We learn, for example, that Acadian children in institutional care were chronically underfunded throughout the 20th century, that the establishment of Children’s Aid Societies occurred much earlier in anglophone counties than elsewhere in the province, that the Mi’kmaq and Wolastoqiyik were routinely denied access to social services, and that state-provided “social care” in Indigenous communities was often about assimilation.

Oral histories from former and practicing social workers gives this book a rich texture. Their creativity and compassion shines through in many accounts, especially as they worked within the “double binds” created by Poor Law regulations and a lack of resources. Without these oral histories we might never hear, for example, of resourceful welfare workers who secured a household full of goods for the family of an unemployed army veteran “from the estate of an elderly woman…known to us” (78). At the same time, Lewey, Richard, and Turner are careful not to romanticize these histories of poverty and the responses to it. We also hear of the many subtle and not-so-subtle indignities that the poor faced, such as the exploitative practices of store merchants who cashed welfare vouchers in exchange for 10% of their value. The authors don’t gloss over the fact that being poor meant being stigmatized and alienated, and that welfare workers were also culpable in constructing the societal shame that surrounded poverty and despair.

The advantage of multiple-authorship is, of course, that a variety of perspectives can be brought to bear on a topic. In this case, the combination of social work scholars (Lewey and Richard) and a practitioner (Turner) means that their history is attuned to social work theory and we are invited to think carefully about social workers’ relationships to their clients as well as society and the state. But the shared responsibility for authoring different chapters can have its limitations, too. For example, a clear, overall picture of the professionalization of social work in New Brunswick never quite emerges, perhaps because it’s only partially addressed in bits and pieces throughout several chapters. On one hand, the somewhat disjointed discussion of professionalization might be the point: after all, it was a murky process that took place more readily in some fields (like child welfare) than in others. Yet the inclusion of a brief index on the “Origins of the New Brunswick Association of Social Workers” suggests that there is a more coherent story to be told. We can’t help but wonder what this origin story might have looked like if it was included in the main text, connected to the historical context in which it evolved, and considered within the broader modernization of social welfare in the province.

Lewey, Richard, and Turner have targeted an audience of social workers who are interested in paying homage to their forerunners, as well as those interested in enriching their “structural social work” practice through an analysis of economic, racial, and colonial injustice in the province. In doing so, they have laid the groundwork for fascinating studies that might be taken up by historians. As I was reading the biographical sketches of the first Acadian social workers, for instance, I was thinking about how their lives and work might be the basis of a study in the vein of Suzanne Morton’s Wisdom, Justice, and Charity: Canadian Social Welfare through the Life of Jane B. Wisdom, 1884-1975 (Toronto: University of Toronto Press, 2014). There’s much to be learned from the continued excavation of New Brunswick’s social welfare story before (not to mention during and after) Equal Opportunity.

Lisa Pasolli is an Assistant Professor of History at Queen’s University. Her research examines social policy in 20th century Canada.

The Acadiensis Blog is a place for Atlantic Canadian historians to share their research with both a scholarly and general audience. We welcome submissions on all topics Atlantic Canadian. If you are interested in contributing to the blog, please contact Acadiensis Digital Communications Editor Corey Slumkoski at corey.slumkoski@msvu.ca.
View all posts by The Acadiensis Blog →
This entry was posted in Book Review. Bookmark the permalink.