Age and Athleticism: A Wolfville Rector on Nineteenth-Century Cricket

Recently, my friend Peter Latta was kind enough to share with me a newspaper item – a letter to the editor – drawn from his research on the history of Amherst, Nova Scotia.  Published on 24 March 1921 by the Amherst Daily News, the letter was written by the Rev. Richard Ferguson Dixon, the Anglican Rector of Wolfville.  At the time the president of the Wolfville Cricket Club, Dixon recounted an effort made during the summer of 1920 to restore that sport to the eminence it had enjoyed before the First World War.  Clubs from Annapolis Royal, Bridgetown, Kentville, Windsor, and Wolfville had competed vigorously, and the season had reached a satisfying conclusion when a Valley select team had lost only narrowly to the West Indians of Halifax.  Now, in 1921, Dixon hoped that a team would be organized in Amherst, just as was already taking place in Stellarton, so that the sport could continue its recovery.  At almost 70 years old, and having served the Church of England in the Maritimes since 1894 – born in the north of England, he had moved to Canada in 1872 and spent the intervening years in Ontario – he saw “no reason why, in due time, every town and large village in the Maritime Provinces should not possess, as it did twenty-five or thirty years ago, a flourishing cricket club.”[1] 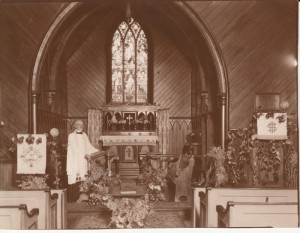 Dixon’s recollection of the late nineteenth century was accurate enough, although his prediction was over-optimistic.  Despite persisting during the 1920s in places such as Stellarton, Truro, and Whitney Pier, cricket never regained its earlier status as Nova Scotia’s pre-eminent team sport.  From a historical perspective, however, by far the most interesting part of Dixon’s letter is the passage in which he compared the significance of available sports for men – the gendered context was explicit – of varying ages:

The decline of cricket in Nova Scotia and elsewhere in Canada during the past ten or fifteen years, in my opinion, is very regrettable.  Baseball cannot take its place, for it is a game for boys and very young men.  No man can successfully play baseball or has any inclination to do so, as a rule, to put it at the latest, after thirty.  Golf is the elderly and old man’s game; tennis, a fine game in its way lacks the camaraderie and, I may add, the spice of danger that keeps a man’s nerves braced up in cricket in “standing up” to a swift bowler.  This is also lacking in quoits, curling, bowls, and other games of the same character.

What I have said of baseball will apply even more so to hockey and [rugby] football.  Cricket is the old game that bridges the gulf in our sports between thirty and sixty, or say, fifty-five, between the violent and grueling strenuousness of baseball, hockey and football, and the leisureliness of golf, bowls, curling, etc.  It is the one game that keeps men young.[2]

In reality, cricket in the years immediately preceding the outbreak of war had been considerably less friendly to the traditional town and village clubs than had been true in the nineteenth century.  The Nova Scotia Cricket League (NSCL), 1906-1914, had been athletically demanding.  Long-established clubs such as Windsor and Truro, with their noticeably wide range of ages among the players, had fallen well short of the standard needed to be competitive, and did not last long in the league.[3]

But that did not mean that such clubs had lacked solid reasons for the associativity that underpinned their existence in earlier phases of settler society.  Delineating settler space had been one important function of the actual playing of cricket, as this and other sports took their part in the cultural and environmental elements of Indigenous displacement.[4]  Beyond the activity itself, the town and village clubs embraced a spectrum of the middling social ranges of settler society.  Both through promoting social mobility in themselves, and in broadening settler networks through localized travel to other communities, these were associations that enhanced sociability and in doing so strengthened a level of social coherence that in turn lent itself to extension of environmental control.  While men and women made distinct contributions – men as players and club officials, women as promoters of sociability – the respective gender roles were complementary in advancing the effectiveness of the sport as an instrument of the integration and expansion of the settler population.[5]

What Dixon had observed was another linked dimension in the social role of cricket in settler communities, the intermixture of ages.  In a celebrated legal judgment of 1977 on the threat posed by development to an English village cricket ground, as noted by the legal historian David Fraser, Lord Denning portrayed idealistically a sport in which “nearly every village has its own cricket field where the young men play and the old men watch.”[6]  For Dixon, however, Nova Scotian cricket had seen the young and the old – within reason, at any rate – playing alongside one another.  Whether or not it kept the old men young is open to doubt.  But when it came to family alliances and the networking of an expansionist settler space, even the aging players had a significant role to fulfill.

Historiographically, the role of age in associativity raises interesting questions that connect with ongoing debates arising from the arguments advanced by Stefan Szymanski on the origins of modern sport in associativity and the nature of the sports club.  In Anglo-Saxon contexts, Szymanski contended in 2008, club formation proceeded largely independently of the state, whereas in contexts such as those of France and Germany state approval in some form was a prerequisite.  Thus, the opportunity for relatively free association as early as in the mid-eighteenth century, not the later onset of industrialization, provided the basis for the distinctive evolution of sport in England and in the United States.[7]

In nascent settler societies, it might be countered, the specific relationship of the state – meaning in the Nova Scotia case colonial and then provincial governance – with associative activity can be seen as a moot point, since both worked in tandem on the settler colonial project.  Moreover, as Malcolm MacLean pointed out in a commentary on the original Szymanski essay, analysis of the relationship between sport evolution and social class does compel attention to nineteenth-century industrialization.[8]  Only in this context can the distinctive elements be understood of, say, the cricket clubs formed by nineteenth-century coal miners in Nova Scotia as in Great Britain (including Scotland) and Australia.  But age, when studying clubs devoted to athletic activity that was necessarily experienced differently at varying times of life, is also an important interpretive lens.  Traditional settler clubs in the vein of those formed in towns and villages in Nova Scotia had good reasons for embracing an associativity that was open to a mixture of ages, even though by the turn of the twentieth century it had effectively rendered such clubs unable to compete athletically with the miners’ clubs when they eventually met in the NSCL – or even with the Halifax-based clubs such as the Wanderers, the Garrison, or the West Indians.

So does age belong in the same interpretive league as gender in terms of sociability, as social class in defining the role of coal miners, or as race/ethnicity when considering clubs such as Whitney Pier or the West Indians?  To argue that way might perhaps be to build too much on the Rector’s recollections of what, to him, had been a golden era of town and village cricket.  And yet colonial settlement was an intergenerational process, and settler sport drew its imperatives accordingly.

John Reid is Professor Emeritus in the Department of History at Saint Mary’s University.

[5]  These observations are based largely on Reid, “The Cricketers of Digby and Yarmouth Counties, Nova Scotia, 1871-1914: Social Roots of a Village and Small-Town Sport,” Histoire sociale/Social History, 51:103 (May 2018), 47-73.  On sociability, see the studies of Bonnie Huskins, including for this era, Huskins, “From Haute Cuisine to Ox Roasts: Public Feasting and the Negotiation of Class in Mid-19th-Century Saint John and Halifax,” Labour/Le Travail, 37 (Spring 1996), 9-36.

[7] Stefan Szymanski, “A Theory of the Evolution of Modern Sport,” Journal of Sport History, 35:1 (Spring 2008), 1-32.  Commentaries by three other sport historians, with a response by Szymanski, were contained in a Forum in the same issue of the journal, while the debates have been continued most recently in an article by Mike Huggins, arguing that gambling as a motivating force for sport development had been underestimated by Szymanski.  See Huggins, “Associativity, Gambling, and the Rise of Protomodern British Sport, 1660-1800,” Journal of Sport History, 47:1 (Spring 2020), 1-17.

(Courtesy of the Wolfville Historical Society)